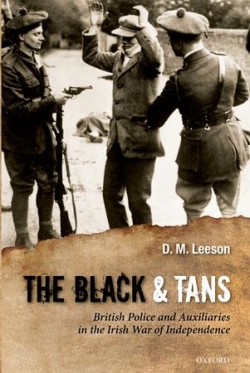 A Book review by Padraig O’Ruairc

With the centenaries of the 1916 Rising and War of Independence fast approaching a whole raft of books of widely varying quality are being published on the Irish revolutionary period from 1913 -1923. So far the majority of these books have focused on the lives and exploits of the 1916 rebels, and republican guerrillas – but Leeson, a Canadian historian, has instead opted to write about the Black & Tans and R.I.C. Auxiliaries. Leeson’s book “The Black & Tans” is not the first on the subject: Richard Bennett’s book “The Black and Tans” was first published in 1959, and last year Ernest McCall published “Tudors Toughs. A Study of The Auxiliary Division Royal Irish Constabulary 1920 -1922.” However Leeson’s book is the first academic work to take a look at the Black & Tans / R.I.C. Auxiliaries and is without doubt the best book yet published on the subject.

Leeson’s book starts by charting the British Governments difficulties in maintaining control in Ireland, and maintaining the integrity of the R.I.C., in the face of growing republican militancy from 1918 onwards. This led the British government to begin recruiting ex-soldiers in Britain and through the Empire as members of the R.I.C. which had traditionally been an Irish dominated police force. Leeson conducts a statistical analysis of the 1,153 men who joined the R.I.C. in October 1920 using it as a sample against which to test the enduring myth that the Black and Tans were jailbirds from England who had been specifically released from prison to join the R.I.C.  He also documents the experiences of members of the Black & Tans and Auxiliaries during the war, with separate sections on their experience of ambushes, assassination attempts, barracks attacks and after being captured by the I.R.A. He examines the role that Black & Tans and Auxiliaries played in British reprisal killings and arson attacks and asks what drove these men commit these acts.

Throughout Leeson’s book is well structured, well argued and clearly written. Leeson’s book is one that anyone interested in the War of Independence will undoubtedly learn something from. His work is at its strongest when he is analysing the development of the British Government’s policing policy in Ireland and R.I.C. recruitment from 1919 onwards. However Leeson’s work is most flawed in his examination of events at a local level which seriously detracts from what would otherwise have been a very good book. Leeson chooses the police jurisdiction of Galway West Riding as his case study for the War of Independence . His narrative of the conflict in the county is weak, contains a number of factual errors and is overly reliant on the official British version of events.

For example when dealing with the sensitive issue of spies Leeson states that the I.R.A. in Galway West executed five suspected spies. This is incorrect – two of these men, Thomas Molloy and Thomas McKeever, were killed by the Black & Tans. In his footnotes Leeson raises the possibility “that the police killed Molloy under a false flag”. Yet in the main body of the text he sticks to the official British version of events that Molloy had been killed by the I.R.A. and Leeson counts him as a victim of I.R.A. violence.

Leeson doesn’t express any similar doubts about his claim that the I.R.A. killed McKeever. Leeson’s research would have benefited from better use of the statements of Galway I.R.A. veterans collected by the Bureau of Military in the 1950‘s. Thomas Mannion an I.R.A. officer from Dunmore, where McKeever was killed, stated categorically that McKeever was not a spy and that he had been killed by the R.I.C. (See Thomas Mannion BMH WS 1408 Pages 15 – 16 National Archives Dublin) Leeson also states that the body of Patrick Joyce one of the three suspected spies who were actually shot by the I.R.A. – “was never found.” However Joyce’s body was discovered and disinterred by An Garda Siochana in 1998. Given the controversies and debates that have arisen concerning the execution of suspected spies by the I.R.A. during the War of Independence Leeson should have researched these cases in much more depth.

Leeson also makes some mistakes when recording the geography of the region. For example he refers to a police riot in Caltra, Galway as having happened in Longford, and states that an I.R.A. ambush in Ballinderry, Roscommon happened in Mayo. To be fair, Leeson probably made these errors simply because he over reliant on these contemporary British newspapers rather than other more reliable sources, but this is another flaw which again detracts somewhat from the overall quality of the work.

There are other aspects of Leeson’s work on the War of Independence in the West of Ireland which are also disappointing. Leeson’s account of the Rineen Ambush (22nd September 1922) which took place near Milltown Malbay in County Clare is poorly researched. Leeson repeats the revisionist version of the ambush proposed by the Richard Abbott in his book “Police Casualties in Ireland 1919 – 1922”. According to Leeson six members of the RIC were ‘massacred’ at Rinneen “where the guerrilla’s were suspected of using dum dum bullets and finishing off the wounded.” The deaths of R.I.C. men killed by the I.R.A. were usually recorded on the R.I.C. register as having been “Murdered by Sinn Feiners” – however the registrar recording the death of Reginald Hathaway states that he was simply “Killed in ambush.” This record of  Hathaway’s death at Rineen seems to contradict the version of events which maintains that the I.R.A. had ‘massacred’ the R.I.C. or ‘finished off the wounded.’

Leeson’s various references following the Rineen ambush, while mentioning the reprisals against property and rioting which followed failed to explore in any depth the full scale of the reprisal killings which occurred. Leeson quotes a contemporary report from the Manchester Guardian newspaper which claimed that after the ambush “two men were killed in Ennistymon …both of them were ‘marked’ men – men believed to have Sinn Fein Connections.’ Infact six people were killed in R.I.C. / Black & Tan reprisals following the Rinneen ambush including two elderly men and a teenage girl – Norah Fox. Only one of the six, Patrick Lehane, was an active member of the I.R.A.

On pages 127 and 128 Leeson discusses in detail the use of the steamship ‘Shannon’ by G Company of the Auxiliaries who were stationed at the Lakeside Hotel at Killaloe in Clare. He describes in detail the damage that was done to the boat by the Auxiliaries and states that the boat was “too slow, old and expensive for G Companies purposes”. However Leeson fails to mention what purposes the Auxiliaries had intended the boat for. The Shannon was used by the Auxiliaries to abduct and kill three members of the I.R.A.( Michael Mc Mahon, Alfred Rodgers & Martin Gildea) and a civilian (Mike Egan) who after being interrogated were tied together and shot dead on Killaloe Bridge. Leeson failed to mention this event in his book. It is a pity that Leeson overlooked this, since this multiple killing would have been far more relevant to his thesis than a discussion on the Auxiliaries yachtsmanship!

Leeson has produced some great research on the reprisals carried out by Irish members of the regular R.I.C. during the War of Independence. However he missed a great opportunity by not examining the role played by Irishmen who joined the Black & Tans and Auxiliaries. Although the traditional Irish narrative states that Black & Tans were all Englishmen, recent archival work by W.J. Lowe has shown that approximately 10% of the Black & Tan’s recruits and 14% of the Auxiliaries were Irishmen. (For more see Lowe, W.J. “Who were the Black-and-Tans?” History Ireland Autumn 2004.) By contrast on page 108 Leeson excludes 16 men from his sample of Black & Tans who joined the force in October 1920 “for being Irish.” Yet the Irishmen who joined the R.I.C. as Temporary Constables (Black & Tans) or R.I.C. Auxiliary Cadets would have been party to the same pay, conditions, and uniform shortages as their British counterparts. Here Leeson has missed a great opportunity to examine whether Irishmen joined the Black & Tans or Auxiliaries because they were had suffered I.R.A. intimidation or because it was a natural step for those who had Loyalist political sympathies.

I was also a bit disappointed by the brevity of the conclusion as I felt that the author could have done more to develop definite conclusions and to construct an argument about the role of the Black & Tans and Auxiliaries in the War of Independence. For example Leeson fails to explain why the British Army did not earn an equally odious reputation in Irish history and folk memory as that afforded to the Black & Tans when their actions during the War of Independence were often comparable.

Despite these stated flaws Leeson’s book is a very good effort. It is by far the best book yet written on the subject of the Black & Tans / R.I.C. Auxiliaries and is set to become recommended reading for those studying this period of Irish history and I eagerly look forward to seeing more of his work on the period.