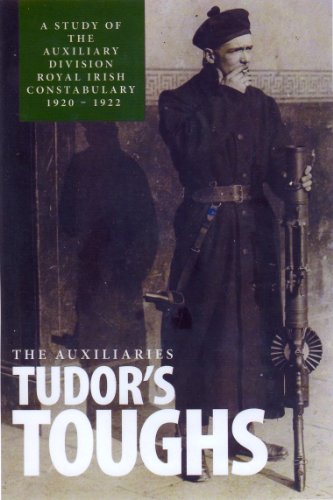 Recently we have had requests for more information on the RIC/Black and Tans /Auxillaries. So to get a different perspective, please see the article below.

Royal Irish Constabulary – The first anti-terrorist unit in the world

The Auxiliary Division Royal Irish Constabulary (ADRIC) came into being on 23/7/1920 (the date of the first recruit).  Their remit was to face a rough and dangerous task – fighting the IRA.  The Auxiliary Division was formed into 21 Companies based on British Army formations, however, the rank structure was that of the Royal Irish Constabulary and they wore RIC rank insignia.  The men of the ADRIC were classed as Temporary Cadets (equivalent to Sergeant) as the RIC had an officer cadet system.   Within the ADRIC was another Division called the Veterans & Drivers Division who specialised in driving and security duties and they were classed as Temporary Constables and not Temporary Cadets.  Inside an eighteen day period during July / August 1920, 15 Auxiliary Companies were formed and distributed around the troubled spots.  The RIC Special Reserve (the Black & Tans), were classed as Temporary Constables and are often confused with the ADRIC although they were two distinct units within the RIC.   The ADRIC were sent to the Marital Law Areas of Ireland concentrating on Cork, Limerick and Dublin.  Each Company had approximately 100 officers and men.  They were highly mobile and they had a selection of vehicles including two Rolls Royce armoured cars.  The Auxiliaries were overwhelmingly former officers of the British Army who were demobilised after the Great War.  Nevertheless, there were former officers from British Empire regiments i.e. Canadians, New Zealanders, Australians, South Africans and some Americans who had served in British regiments during the Great War.

Republican propaganda at the time claimed they were “the dregs and scum from English gaols and pubs”, which is nowhere the truth.  In fact, approximately 10% of the ADRIC held bravery awards from Victoria Cross to Mentioned in Dispatches.  During the existence of the ADRIC, some gained bravery awards for actions whilst in Ireland.  The Auxiliaries soon gained a reputation of being ferocious fighters and the IRA put a bounty of £50 on each Auxiliary head.  The ADRIC were involved in the “Bloody Sunday” shooting at Croke Park and a week later the IRA got its revenge at Kilmichael, County Cork by ambushing and killing 16 Cadets and one Veteran Driver, which resulted in the greatest loss of life for the RIC during the War of Independence.  The ADRIC learnt from the Kilmichael ambush and the IRA never had a similar success against the ADRIC for the remaining period of the war.   In Dublin as a result of the Croke Park shooting and Crown Forces activity the IRA did not organise an attack on the ADRIC until April 1921, some six months later.  In May 1921 during the Customs House attack, the last major IRA attack of the war, Auxiliaries from “F” & “Q” Companies along with some military captured approximately 100 IRA men with weapons and killed five of them during the exchange of gunfire.  The failed Customs House attack had a major influence on the IRA’s future strategy.  In the other Martial Law areas the Auxiliaries acted independently and achieved many successes as well as the occasional setback.  Within 50 weeks of the ADRIC being formed the IRA was signing the Truce.  Their effect on the IRA was such that the Republicans ensured that the Auxiliary Division were included in the Anglo-Irish Treaty.  They (the IRA) requested that no more Auxiliary Police were to be recruited except for maintaining drafts.  There is no doubt that the ADRIC had a major influence on the War of Independence and had it not been for the Truce, they along with the Army would have put down the rebellion, but 10 Downing Street settled for the Truce.  The Auxiliary Division was disbanded by January 1922.  Some commentators claim that the Auxiliaries were the first anti-terrorist unit in the world. 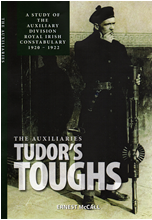 Copies of the book can be purchased by sending a sterling cheque made out to E McCall to the value of £27.85 (inclusive of postage within the UK, outside the UK the book & postage is £30.60, book & airmail is £35.60 and these prices are subject to change) to “Tudor’s Toughs”, PO Box 262, Newtownards BT23 9DP, County Down, Northern Ireland, UK

If you wish a presentation or order the book on Tudor’s Toughs please me contact re fees etc at mccall.ernest@gmail.com

COMMENTS BY THOSE WHO HAVE BOUGHT “THE AUXILIARIES – TUDOR’S TOUGHS”

AMERICAN BUYER, “I cannot say enough about it. Not only was it everything I had hoped for and more, but it is such a beautifully finished book. Befitting of what is a labour of love. Well done, Sir!  It is already one of my favoured possessions. I am going to cool my heels for a while tomorrow, and your book will be with me”.

IRISH REPUBLIC BUYER, “I would be very interested in buying your book which I am told is an invaluable source”.

NORTHERN IRELAND HISTORIAN, “I haven’t put the book down since I got it”.

ENGLISH BUYER, “Received the book this morning, cannot put it down”.

THE RIC FORUM, “This is a very informative reference copy and will add to the body of knowledge about the world’s first mobile counter-insurgency force”.

IRISH MILITARY HISTORIAN, “I would like to take the opportunity to congratulate you on a wonderful piece of research and work; I look forward to your next work”.

CANADIAN HISTORIAN, “You have managed to compile the information in a form that is very readable and not just a collection of cold facts.  It will be a valuable resource for anyone interested in this period of Irish history”.

IRISH HISTORIAN, “It is a wonderful addition to the history of policing in Ireland.  This book deserves an honoured place on the shelf of every Irish historian”.