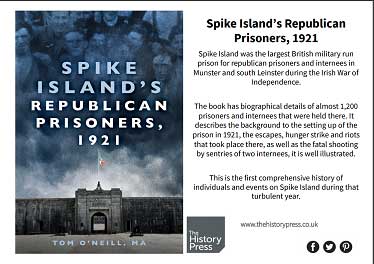 Written by Tom O’Neill
€20.00 Paperback
May, 2021
Spike Island was the largest British military run prison for republican prisoners and internees in Munster and south Leinster during the Irish War of Independence. The book has biographical details of almost 1,200 prisoners and internees that were held there. It describes the background to the setting up of the prison in 1921, the escapes, hunger strike and riots that took place there, as well as the fatal shooting by sentries of two internees. It is well illustrated.

This is the first comprehensive history of individuals and events on Spike Island during that turbulent year.