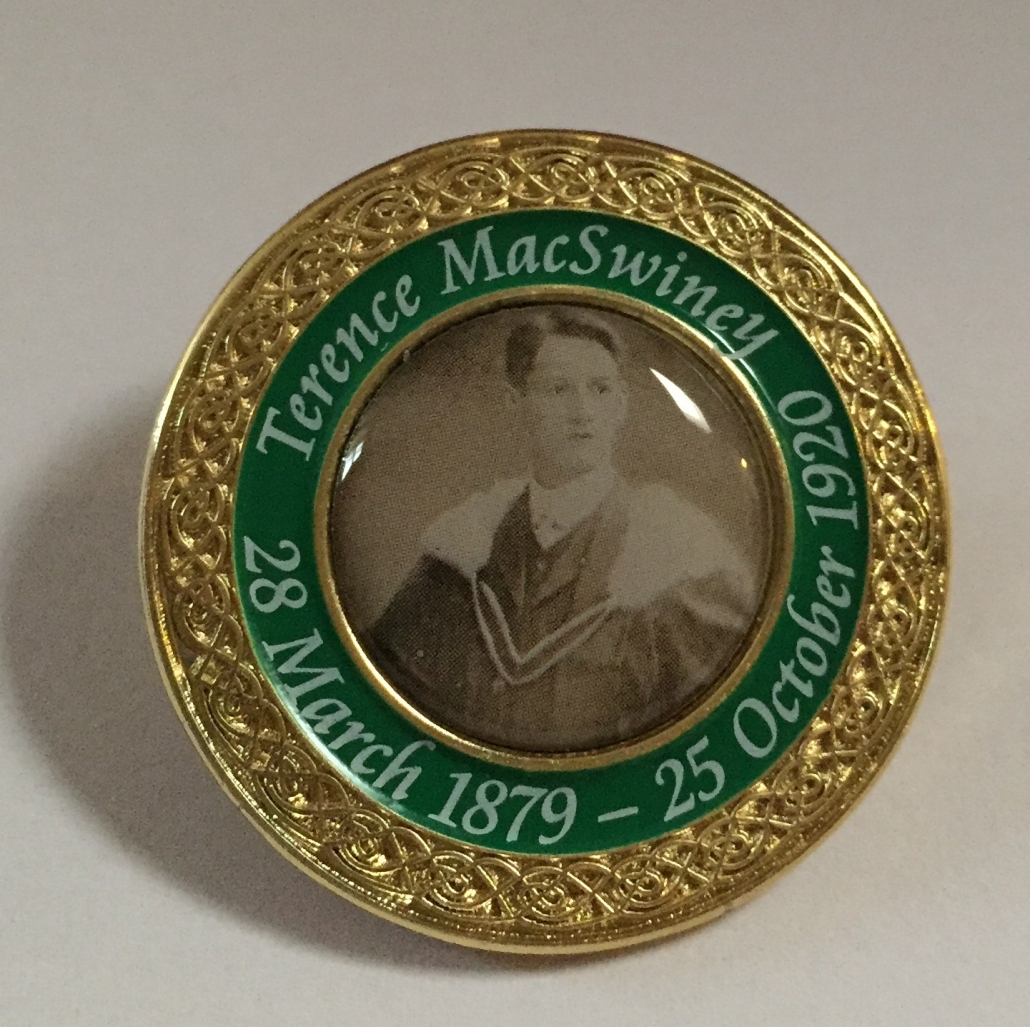 Born at 23 North Main Street, Cork,[3] MacSwiney was one of eight children. His father, John MacSwiney, of Cork, had volunteered in 1868 to fight as a papal guard against Garibaldi, had been a schoolteacher in London and later opened a tobacco factory in Cork. Following the failure of this business, he emigrated to Australia in 1885 leaving Terence and the other children in the care of their mother and his eldest daughter.[4]

MacSwiney’s mother, Mary Wilkinson, was an English Catholic with strong Irish nationalist opinions. He was educated by the Christian Brothers at the North Monastery school in Cork city, but left at fifteen to help support the family.[5] He became an accountancy clerk but continued his studies and matriculated successfully. He continued in full-time employment while he studied at the Royal University (now University College Cork), graduating with a degree in Mental and Moral Science in 1907.[6]

In 1901 he helped to found the Celtic Literary Society, and in 1908 he founded the Cork Dramatic Society with Daniel Corkery and wrote a number of plays for them.[6] He was educated as an accountant and also was a playwright, poet, and writer of pamphlets on Irish history. His first play The Last Warriors of Coole was produced in 1910.[7] His fifth play The Revolutionist (1915) took the political stand made by a single man as its theme.[5]

Described as a sensitive poet-intellectual,[8] MacSwiney’s writings in the newspaper Irish Freedom brought him to the attention of the Irish Republican Brotherhood.[7] He was one of the founders of the Cork Brigade of the Irish Volunteers in 1913, and was President of the Cork branch of Sinn Féin. He founded a newspaper, Fianna Fáil, in 1914, but it was suppressed after only 11 issues. In April 1916, he was intended to be second in command of the Easter Rising in Cork and Kerry, but stood down his forces on the order of Eoin MacNeill.[9]

Following the rising, he was imprisoned by the British Government under the Defence of the Realm Act in Reading and Wakefield Gaols until December 1916. In February 1917 he was deported from Ireland and imprisoned in Shrewsbury and Bromyard internment camps until his release in June 1917. It was during his exile in Bromyard that he married Muriel Murphy of the Cork distillery-owning family.[9] In November 1917, he was arrested in Cork for wearing an Irish Republican Army (IRA) uniform, and, inspired by the example of Thomas Ashe, went on a hunger strike for three days prior to his release.[10]

In the 1918 general election, MacSwiney was returned unopposed to the first Dáil Éireann as Sinn Féin representative for Mid Cork,[11] succeeding the Nationalist MP D. D. Sheehan. After the murder of his friend Tomás Mac Curtain, the Lord Mayor of Cork on 20 March 1920, MacSwiney was elected as Lord Mayor. On 12 August 1920, he was arrested in Cork for possession of “seditous articles and documents”, and also possession of a cipher key. He was summarily tried by a court on 16 August and sentenced to two years’ imprisonment at Brixton Prison in England.[6]

In prison he immediately started a hunger strike in protest at his internment and the fact that he was tried by a military court.[10] Eleven other Irish Republican prisoners in Cork Jail went on hunger strike at the same time.[10] On 26 August, the British Government stated that “the release of the Lord Mayor

would have disastrous results in Ireland and would probably lead to a mutiny of both military and police in south of Ireland.”[10]

MacSwiney’s hunger strike gained world attention. The British Government was threatened with a boycott of British goods by Americans[citation needed], while four countries in South America appealed to the Pope to intervene. Protests were held in Germany and France as well. An Australian member of Parliament, Hugh Mahon, was expelled from the Australian parliament for “seditious and disloyal utterances at a public meeting”, after protesting against the actions of the British Government. Two weeks later, the Spanish Catalan organization Autonomous Center of Employees of Commerce and Industry (CADCI) sent a petition to British Prime Minister calling for his release and the newspaper of the organization, Acció (Acción in Spanish) , began a campaign for MacSwiney.[12]

Food was often placed near him to persuade him to give up the hunger-strike. Attempts at force-feeding MacSwiney were undertaken in the final days of his strike.[10] On 20 October 1920 he fell into a coma and died five days later after 73 days on hunger strike. His body lay in St George’s Cathedral, Southwark in London where 30,000 people filed past it.[10] Fearing large-scale demonstrations in Dublin, the authorities diverted his coffin directly to Cork, and his funeral in the Cathedral of St Mary and St Anne on 31 October attracted huge crowds. Terence MacSwiney is buried in the Republican plot in Saint Finbarr’s Cemetery in Cork. Arthur Griffith delivered the graveside oration.[10]

A collection of his writings, entitled Principles of Freedom, was published posthumously in 1921. It was based upon articles MacSwiney contributed to Irish Freedom during 1911–1912. MacSwiney’s life and work had a particular impact in India. Jawaharlal Nehru took inspiration from MacSwiney’s example and writings, and Mahatma Gandhi counted him among his influences.[5][13] Principles of Freedom was translated into various Indian languages including Telugu.[5] The Indian revolutionary Bhagat Singh was an admirer of MacSwiney and wrote about him in his memoirs.[14] When Singh’s father petitioned the British Government in India to pardon his son, Bhagat Singh quoted Terence MacSwiney and said “I am confident that my death will do more to smash the British Empire than my release” and told his father to withdraw the petition. He was executed on 23 March 1931 with two other men for killing a British officer.

Other figures beyond India who counted MacSwiney as an influence include Ho Chi Minh, who was working in London at the time of MacSwiney’s death and said of him, “A nation that has such citizens will never surrender”.[14] On 1 November 1920, the Catalan organization CADCI held a demonstration in Barcelona, where the poet and politician Ventura Gassol delivered an original poem extolling MacSwiney.[12]