The Photo comes mounted in a high quality beveled mount with backing, all  ready to be framed,

Michael “Mick” Collins  16 October 1890 – 22 August 1922) was an IRISH revolutionary leader , Minister for Finance, and Teachta dala, (TD) for cork south in the First Dail , of 1919, Director ofIntelligence for the IRA, and member of the Irish delegation , during the Anglo-Irish solution , negotiations. Subsequently, he was both chairman of the provisional Government and commander in chief of the National Army. Throughout this time, at least as of 1919, he was also President of the Irish Republican Brotherhood. Michael Collins was shot and killed in August 1922, during the Irish civil war. 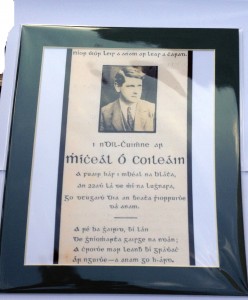