Many thanks to Gerard Burrows for the following article and pics. Its’ a very interesting collection of photos  and information relating to General Tudor.

I read with interest your references to Tudors Toughs ie the Tan, Auxies etc. As you know Tudor was the only man ever to hold the title Chief of Police in Irish Police history. I own the complete uniform of Major Gen Tudor which can be seen on some photos of the period and also archived News reels of him and Gen French inspecting Auxies in Dublin. My Grandfather was head constable in the RIC (22 yrs) and was based in Killorglin at the time of the Castlemaine Ambush which Dan Keating took part in. My mother relatedthe story of this ambush many a time when I was young, she told us that her father was told by the mother of one of the ambushers that this ambush was to take place. My grandfather had pleaded with the DI not to send the men to Tralee to collect their wages that day but he was over ruled by the DI with the result that 8 were killed my mother said there was as many as 11 killed as she was in the station when the bodies were brought back, she also said that my grandfather had to draw his gun to prevent other police going on reprisals. Later my grandfather was sent to West Cork until the truce in 1922. He survived one other ambush at Dunmanway, thanks to his house keeper telling him her son was leading a band of men to kill him. After the Truce he went to England with his family under an assumed name but later returned to live in Belfast on the Falls Road where his youngest son joined the IRA under old Wish Fox. Later my grandfather exiled him to England and he didn’t return home until his father died. My grandfather was from Tralee, a Catholic and an Irish speaker, just thought you might be interested in this wee story.

Hi Garry no problem at all publishing the story of my grand father Michael Blake and I will send you photos of my Gen Tudor collection which includes items of his full dress uniform from the Boer War period, also I have his uniforms from his command in Palestine and I found correspondence from Churchill regarding members of the Police Force in Ireland to be offered posts in Palestine. I have a copy of a letter from Gen Tudor to Churchill in which he refers to the Black and Tans doing a great job there. I have spent about 4 yrs now researching documents and writing to various people in Newfoundland who knew General Tudor including a doctor who was with him when he died. One lady in particular whose father was a friend of Tudor when she was a young girl, this lady by the way is English speaks Irish and is a renowned Harp player and is in her 80’s!!! She sent me a photo of a privately produced book by Gen Tudor entitled “The Fog of War” signed “To Carla with love Hugh” also she sent me a picture of his brass knuckle duster!!!! This item he always carried while meeting the boats coming in with their catches as most of the crews were Irish. A friend of mine has Gen Tudor’s palm pistol which he keeps promising to let me have!!! Nothing as yet, it is residing in Florida at the minute. Tudor is difficult to write about as according to Carla Emerson he was declared Persona Non Grata by the establishment in Britain, she speaks of the Scotsman been involved, Ramsey Mc Donald?? although his foreign secretary who led the Labour Party commission to Ireland at the time may have caused his departure, I have checked letters and diaries of these people and found that the Diary of the Foreign secretary had all its pages removed from 1920-25, rather interesting??Anyway to finish my book on Gen Tudor I need to know who sent him to Newfoundland and why there?? as it has a big Irish community, infact Gen Tudors House Keeper/nurse was Irish Monica McCarthy whose family were from Cork. So from Britain’s best General to fish salesman and according to Michael Collins himself during a conversation with Captain William Darling who was one of Tudors Officers in Dublin Castle after Collins had a car accident and was offered a lift to Dublin by Darling who was unaware of who he was helping out until Collins personally introduced himself enroute to Dublin where the pair ended up drinking in the Vaughan Hotel, Collins referred to Tudor as one of Britains best Generals sent to fight him and his men, he also mentioned that the IRA always knew when they encountered Auxies as they tended to put out a good fight!!! His words. This man Darling is the great uncle of Alister Darling the ex British Labour minister. During my searches through British records I found on marked “secret” along with many others!!! But this was one was very interesting as it mentioned a Royal Navy ship was on its way to Ireland with a supply of Gas Grenades for  the “Free State Army” for use against the anti treaty forces, apparently they suddenly discovered that they had signed a treaty prohibiting the use of gas and they were to be disposed of in Dublin Bay!!!! Wonderful what you find when you are researching things. Anyway I will send you some pics of the collection and sorry about the spelling I always get timed out when I go to check it.!!!! 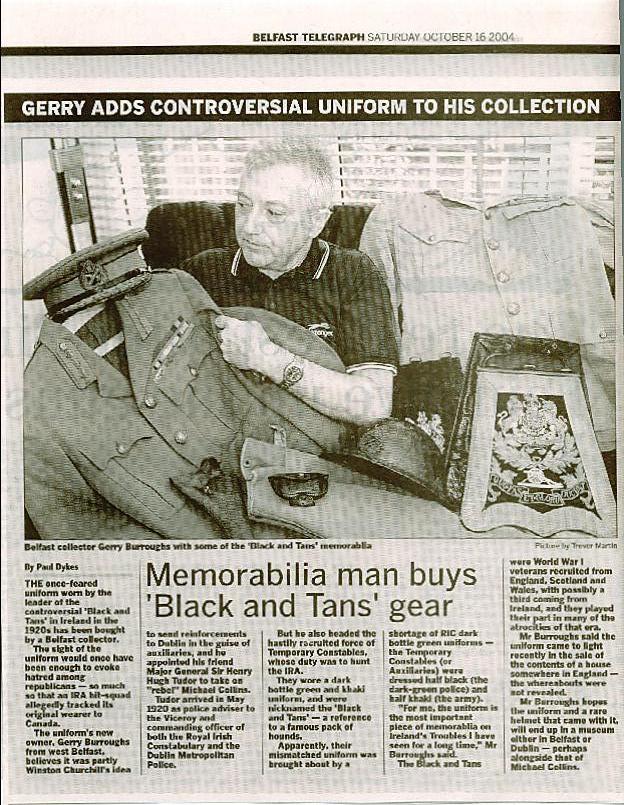 GERRY WITH THE UNIFORM 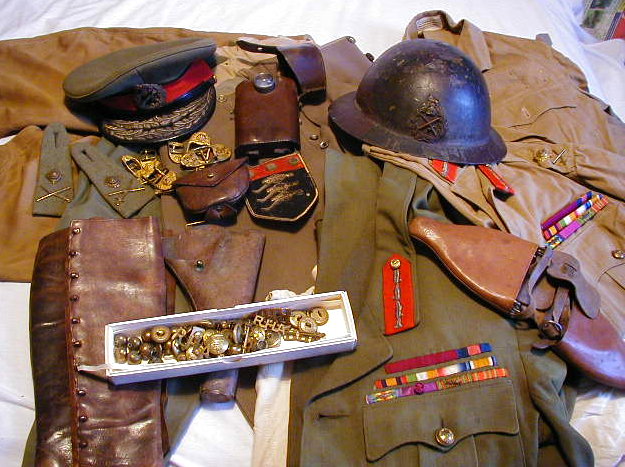