Today The Irish Volunteers Commemorative Organisation marked the 106.th year of the foundation of

Fianna Éireann . The private ceremonies were held by the 4.th Battalion

Fianna Éireann which has been incorporated in to the IVCO some time ago.

On Monday 16 August 1909, in the Camden Street hall, Hobson chaired a meeting ‘to form a National Boys’ Organisation to be managed by the boys themselves on national non-party lines’.20 Estimates suggest that between thirty and 100 boys, ‘mostly adventurers from the Coombe and neighbourhood’, turned up for this meeting to form what became known as Na Fianna Éireann.21 Markievicz and a few other adults were also in attendance. In his address, Hobson explained that the organisation would be run on a semi-military basis along the lines of the Boy Scouts’ movement founded in the previous year by Baden-Powell. In fact, it was one of the immediate objectives of this new group to counteract the influence in Ireland of Baden-Powell’s pro-British body. 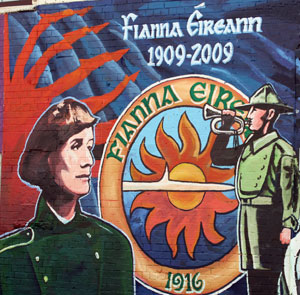