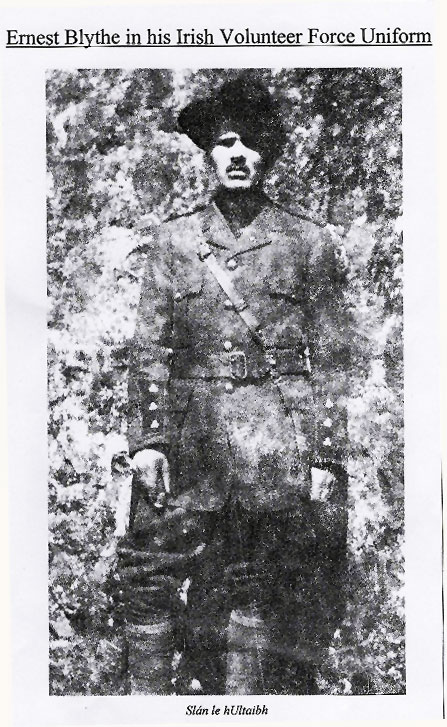 Ernest Blythe (Irish: Earnán de Blaghd; 13 April 1889 – 23 February 1975) was an Irish politician.
Ernest Blythe was born to a Presbyterian and Unionist family near Lisburn, County Antrim in 1889, the son of a farmer, and was educated locally. At the age of fifteen he started working as a clerk in the Department of Agriculture in Dublin.

Blythe joined the Irish Volunteers and the Irish Republican Brotherhood. He also joined the Gaelic League, where his Irish teacher was Sinéad Flanagan, the future wife of Éamon de Valera.

In 1909 Blythe became a junior news reporter with the North Down Herald.

Blythe soon became involved in the activities of the Irish Volunteers. This led to years of arrests, imprisonment, and hunger strikes. He spent the Easter Rising of 1916 in prison. In the general election of 1918 Blythe was elected as a Teachta Dála (TD) for North Monaghan. From then until 1922 he served as Minister for Trade and Commerce. Blythe was a strong supporter of the Anglo-Irish Treaty and in 1923 he became Minister for Finance in W. T. Cosgrave’s first government.

Blythe was committed to keeping a balanced budget at all costs, which was not at all easy. The Irish Civil War had placed an enormous strain on the nascent Free State, with public spending almost doubling in the previous twelve months. As a result, Blythe was confronted with a projected budget of more than £8 million for the coming year when the national debt already stood at £6 million. He did however fund the Ardnacrusha or Shannon Scheme. But there was widespread criticism when he reduced old-age pensions from 10 shillings (50p) to 9 shillings (45p) a week. Blythe also served as Minister for Posts and Telegraphs and Vice-President of the Executive Council. In the 1933 general election Blythe lost his seat.

Blythe was a senior figure in the Blueshirts and his support for the fascist leader Eoin O’Duffy as leader of that organisation (and of the Fine Gael party) left him a marginal figure, once Fine Gael rid itself of O’Duffy.

In January 1934 he was elected to fill a vancany in the Senate created by the death of Ellen Cuffe, Countess of Desart. He served in the Senate until the institution was abolished in 1936. He then retired from politics.

Throughout his life he was committed to the revival of the Irish language. He encouraged Micheál MacLiammóir and Hilton Edwards to found an Irish language theatre in Galway.

Between 1941 and 1967 he served as managing director of the Abbey Theatre. It was said that he rejected many good plays in favour of those which were more financially rewarding and ran the theatre into the ground as a creative force. In 1957 he published an autobiographical account of his life until 1913. 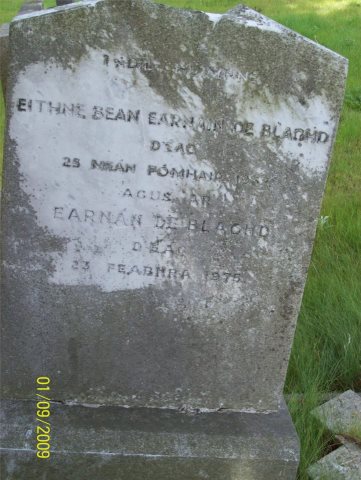 Above: The grave of Ernest Blythe, Glasnevin, Dublin.