Dividing the Nation – A performance of the Anglo-Irish Treaty Debates

Dividing the Nation – A performance of the Anglo-Irish Treaty Debates 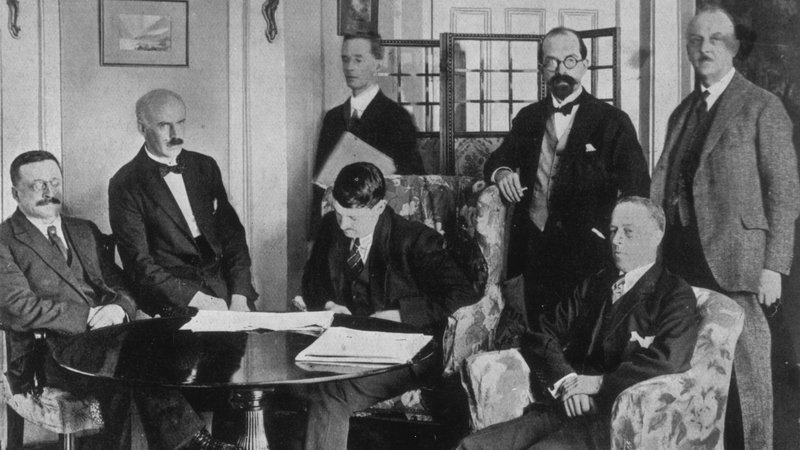 Dividing the Nation – A performance
of the Anglo-Irish Treaty Debates
From the 14th December 1921 to the 7th January 1922, members of Dáil Éireann held a series
of private and public sessions to debate the Articles of Agreement for a Treaty between
Great Britain and Ireland that had been signed in London by representatives of the Dáil and
the British Government. These debates would prove acrimonious and cause deep divisions
between its supporters and opponents. Those divisions would divide the nation and lead to
a civil war that would shape Ireland’s political landscape for a century
To mark the centenary of the Treaty Debates, Cork City Council has funded this unique
historical programme for the students of Cork. To bring the programme to life St Peter’s has
collaborated with students of the Acting for Stage and Screen Course of Coláiste Stiofáin
Naofa to host an adaptation of that historic event. Adapted by Cork historian Gerry White,
directed by Jon Whitty of Coláiste Stiofáin Naofa and performed by the students, this
adaptation will cover some of the key moments of the debates in the words of the
participants, including many Corks’ TDs.
The Lord Mayor of Cork, Cllr. Colm Kelleher stated “ I wish to congratulate St. Peter’s Cork
and participants in the production of this adaptation of the Treaty Debates, which will
provide a better understanding of this significant event. It will also be of value to those with
an interest in that period of our history. This unique historical programme encompasses the
principles and values which Council City Council seek to enshrine as part of our
Commemoration Programme such as to re-affirm the importance of Dáil Éireann, the ideals
and principals of the men and women who played their part in the events and reflect pride in
Cork and its people and the roles they played in the events of 100 years ago. I also wish to
acknowledge the support provided to Cork City Council ‘s Decade of Centenaries
Commemoration Programme by the Department of Tourism, Culture, Arts, Gaeltacht, Sport
and Media”.
Historian Gerry White discussed the adaptation saying “because of time and space it was
necessary to condense debates that lasted days into a 90-minute adaptation. While this was
challenging, the objective was to provide a text that would be fair to both sides and cover
the main arguments in favour and against the Treaty”.
Jon Whitty Director/Teacher with Coláiste Stiofáin Naofa Drama Department said “St
Peter’s Church and Gerry White have been a pleasure for the students and I to collaborate
with. Cork City Council’s funding and the personal collaborations have provided the students
with a great opportunity in which to explore and demonstrate their talents”
Erica Grozavu Fitzgerald an actor in the performance stated “It is an honour to be
portraying the legends of Irish history especially during the centenary of the treaty debates. I
also feel a great pride in playing Mary MacSwiney”
Ian Linehan an actor in the performance stated “It is such an honour to participate in the
centenary anniversary of one of the most momentous moments of Irish history. Bringing the
historical figures to life has been a challenge, but very rewarding. I’ve learned more about
Irish history doing this re-enactment than I ever have-it has been a very interesting and eyeopening experience for me. Many thanks to Gerry White and Jon Whitty for creating this
opportunity and bringing it to life.”
The performances are running in St Peters Church in North Main Street from the 14th – 17th
Dec and the production is for 1 hour and 30 mins, tickets can be booked on
https://www.eventbrite.ie/e/dividing-the-nation-school-performance-tickets-211119001617
The event is supported and funded by Cork City Council and is free to public.
Performance Dates & times:
• Tuesday 14th & Thursday 16th Dec @ 1.30pm
• Friday 17th Dec @ 2.30pm
• Thursday 16th & 17th Dec @ 7pm
NOTE:
• Tickets are limited due to covid restrictions.
• Covid Procedures will be in place to access event – evidence of covid certificate, face
masks to be worn at all times.