Daniel “Dan” Breen (Irish: Dónall Ó Braoin) (11 August 1894 – 27 December 1969) was a volunteer in the Irish Republican Army during the Irish War of Independence and the Irish Civil War. In later years, he was a Fianna Fáil politician.

Dan Breen was born in Grange, Donohill parish, South Tipperary. His father died when Dan was six, leaving them very poor. Looking back on his upbringing in a family of tenant farmers, Breen recalled in a 1967 interview,

“I remember an Englishman asking me in England, oh, about thirty years ago, is it true that we kept the pig in the kitchen. ‘No, we’d have him in the bedroom,’ I said. ‘If we didn’t,’ I said, ‘we couldn’t pay the rent to bastards like you.'”

He was educated locally before becoming a plasterer, and later a linesman on the Great Southern Railway.

Breen was sworn into the Irish Republican Brotherhood in 1912 and the Irish Volunteers in 1914. On 21 January 1919, the day the First Dáil met in Dublin, Breen took part in an ambush at Soloheadbeg. The ambush party, led by Seán Treacy, attacked a group of Royal Irish Constabulary men who were escorting explosives to a quarry. Two policemen were fatally shot during the ensuing gunfight. The ambush is considered to be the first battle of the Irish War of Independence.

“…we took the action deliberately, having thought over the matter and talked it over between us. Treacy had stated to me that the only way of starting a war was to kill someone, and we wanted to start a war, so we intended to kill some of the police whom we looked upon as the foremost and most important branch of the enemy forces … The only regret that we had following the ambush was that there were only two policemen in it, instead of the six we had expected…”

During the Irish War of Independence, Breen had a £10,000 price on his head,however, he quickly established himself as a leader within the Irish Republican Army (IRA). Numerous stories are known about his heroism, one of which details the rescuing of his comrade Seán Hogan at gunpoint from a heavily guarded train at Knocklong station in County Limerick. Another incident occurred in Dublin when he shot his way out through a British military cordon in the northern suburb of Drumcondra (Fernside) in which he and volunteer Seán Treacy escaped only for Treacy to be killed soon after. Breen was shot at least four times, twice of which were in the lung (the first being in the Knocklong rescue). He was present at the ambush in Ashtown on the Meath/Dublin border where Martin Savage was killed while trying to assassinate the Lord Lieutenant of Ireland, Sir John French, 1st Earl of Ypres.

In the June 1922 elections Breen was nominated as a candidate by both the pro- and anti-Treaty sides, but was not elected.

Breen was elected to Dáil Éireann at the 1923 general election as a Republican, anti-Treaty Teachta Dála (TD) for the Tipperary constituency constituency. Following the Anglo-Irish Treaty, Breen joined the Anti-Treaty IRA in the unsuccessful civil war against his former comrades in arms. He was arrested by the National Army of the Irish Free State and interned at Limerick Prison. He spent two months here before going on a Hunger strike for 6 days followed by going on thirst strike for six days. Dan Breen was then released.

Breen published an account of his guerrilla days, My Fight for Irish Freedom in 1924. He represented the Tipperary constituency from the fourth Dáil in 1923 as a “Republican”, along with Éamon de Valera and Frank Aiken. He became the first anti-Treaty TD to actually take his seat in 1927. He was defeated in the June 1927 general election and decided to travel to the United States where he opened a prohibition speakeasy. He returned to Ireland and regained his seat as a member of Fianna Fáil in the Dáil at the 1932 general election. During World War II he was known to hold largely pro-Axis views although he was not as some have suggested anti-semitic. In 1948 an Irish-American visited Breen and was shocked to see two pictures of Adolf Hitler on the wall of Breen’s study. Breen explained to him: “He fought for freedom but not for democracy”. He represented his Tipperary constituency without a break until his retirement at the 1965 election.

He died in Dublin in 1969 and was buried in Donohill, near the place of his birth. His funeral was the largest seen in West Tipperary since his close friend and comrade-in-arms, Seán Treacy was buried at Kilfeacle in October 1920. An estimated attendance of 10,000 mourners assembled in the tiny hamlet, giving ample testimony to the esteem in which he was held. Breen was the subject of a 2007 biography, Dan Breen and the IRA by Joe Ambrose. 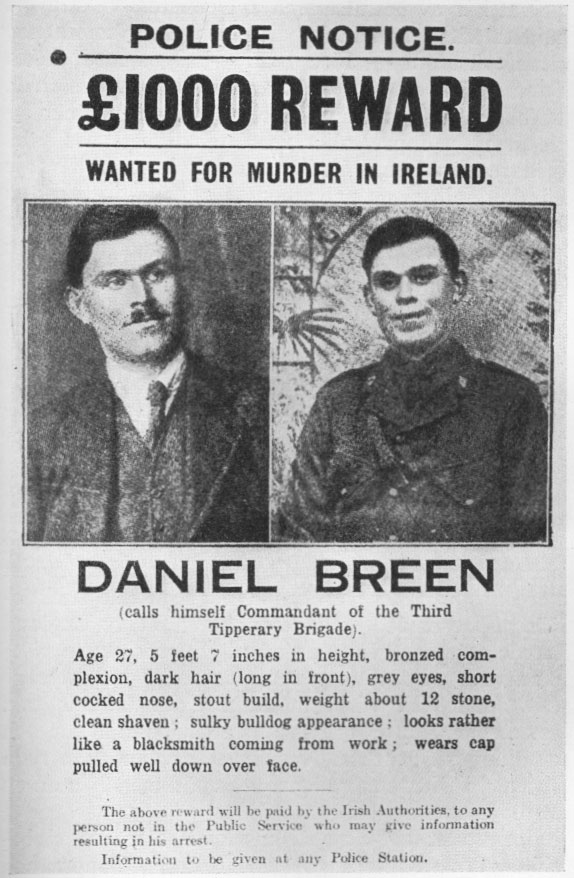